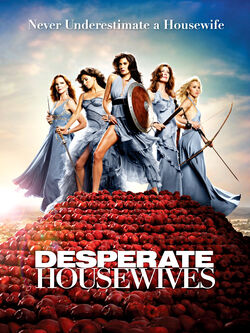 This article contains episode summaries for the sixth season of Desperate Housewives.

*Also seen in archive footage in "Epiphany", accounting for an 11th appearance.

*Credited only in the episodes in which they appear.

**Credited before the "also starring" cast in "I Guess This is Goodbye".

****Also seen in archive footage in "Epiphany", accounting for a 14th appearance.

*Was credited in but absent from two additional episodes.

**Not credited in "Being Alive".

Nice is Different Than Good 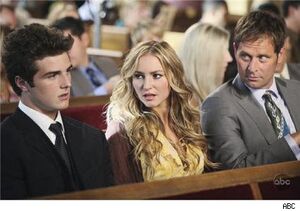 Plot Synopsis: Mike Delfino's bride is finally revealed, and whereas one woman of Wisteria Lane is struck by happiness (yet again), another woman's world falls apart. In the meantime, Lynette tries to cope with her new pregnancy, and develops some unexpected and horrifying feelings towards her unborn babies. Bree begins a reluctant affair with Karl Mayer, and Gabrielle has to deal with raising a rebellious teenage girl. Meanwhile, a new family with a dark past, headed by new housewife Angie Bolen, moves to the street. 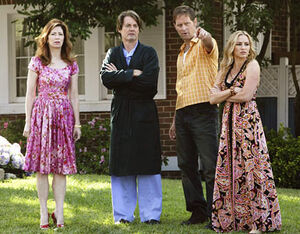 Plot Synopsis: As the citizens of Fairview try to make sense of a recent attack in their neighborhood, Lynette withholds a secret from Susan. Gabrielle gives niece Ana advice on how to get a guy's attention, whereas Bree worries how her affair with Karl will affect her friendship with Susan, and Angie is determined to protect her son and her family's past.

Never Judge a Lady by Her Lover 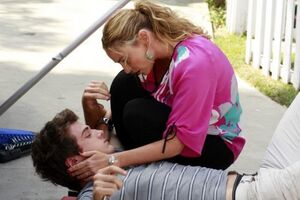 See main article: "Never Judge a Lady by Her Lover"

Plot Synopsis: After a chance encounter with John Rowland, Carlos begins to suspect that his wife still has the hots for him, and allows his niece Ana to be hired by John to test Gabrielle. In the meantime, the Scavos tell their kids they are expecting twins, and Lynette hides her pregnancy from Carlos in order to get a big promotion. Bree realizes Karl is more serious about their affair, but she doesn't want to put much effort into something she does with a man she does not love... or does she? The intensity between Susan and Angie grows as the latter tries to defend her son, but Susan is determined to warn everyone that Danny Bolen is a dangerous kid. 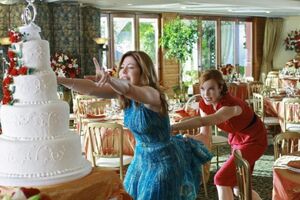 Plot Synopsis: As Katherine unravels, revealing how much of a toll losing Mike has taken on her, Bree comes to her aid. Gabrielle grows weary of John's intentions towards her niece, and during the second trimester of her pregnancy, Lynette's breasts become bigger. In the meantime, Susan learns Julie has been harboring some secrets, and Angie gets Porter to throw a party for her son.

Everybody Ought to Have a Maid 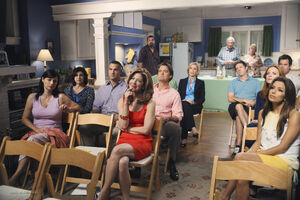 See main article: "Everybody Ought to Have a Maid"

Plot Synopsis: Gabrielle is deemed a bad mother during her daughter Juanita's playdate, and she tries desperately to prove to others that she is a responsible parent. Bree gets defensive when she's judged by a motel maid for having an affair with Karl Mayer, and Lynette is put off by her new handyman, Roy Bender, when he defers to Tom for approval on all things, whereas Susan and Katherine come to blows over Mike. Meanwhile, a lapse in judgment on Danny's part leads to a terrible mishap that Angie and Nick must cover up.

Don't Walk on the Grass 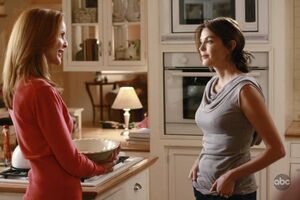 Plot Synopsis: When Bree begins to fall for Karl, she decides it is time to break things up before they get way too serious. However, Karl isn't willing to let her go that easily, and makes her a proposition. In the meantime, Juanita says a bad word during a school play and Gabrielle is attacked by the school's principal, which leads her to respond and ultimately get her daughter out of the school, whereas Lynette learns her husband is cheating during mid-term. Katherine pretends to be on Susan's side to get to Mike, and Angie hides some secrets regarding her mother.

Careful the Things You Say 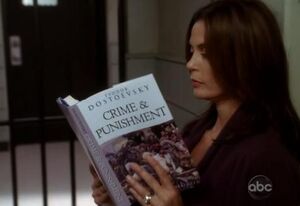 Plot Synopsis: Susan is in desperate need of help to figure out if Katherine was responsible for strangling her daughter, and the detective who agrees to help her, Denise Lapera, shares some history with her that they both would rather forget. In the meantime, Lynette learns about Julie's past affair with Nick Bolen, which leads her to have her own theory as to who may have strangled her. The Hodges are invited over for dinner by the Bolens, and Nick proposes to Bree that she hire Angie to work for her at the catering company. Meanwhile, Gabrielle takes advantage of her housekeeper by making her play the role of Juanita's tuitor. 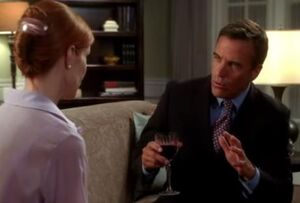 Plot Synopsis: Susan and Katherine are both sentenced to community service by picking up trash, and in the meantime Katherine finds a way to let Susan know she and Mike once had sex five times in a day, which annoys Susan, as her sexual ratio with Mike was never that high, leading her to believe he was closer to Katherine. Meanwhile, Gabrielle goes out of her way to get her daughter into Catholic school, and the only way to do so is by having Carlos send one of his employees, and Lynette's trainee, to Florida, much to Lynette's dismay, as she was training him to cover for her during her soon-to-come maternity leave. Angie refuses to make small talk with Julie Mayer, and Orson lets on that he is suspicious his wife might be cheating on him.

Would I Think of Suicide? 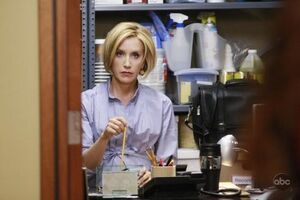 See main article: "Would I Think of Suicide?"

Plot Synopsis: In the wake of another unexpected attack, Nick decides the time has come for him and his family to move away from Wisteria Lane. In the meantime, Susan and Bree clash over the latter's affair with Karl Mayer, whereas Gabrielle and Lynette clash over the latter's pregnancy. Meanwhile, Katherine's crazy schemes have brought Mike to a point where he can no longer put up with her, and a heated arguement between the two of them has shocking results. 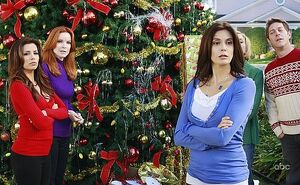 Plot Synopsis: Gabrielle and Lynette's friendship is on the brink of collapse, whereas Bree and Orson come to an agreement about their marriage. Meanwhile, Susan hatches a plan to help an irrational Katherine, and Danny's vital mistake might cost Angie her freedom. In the meantime, Christmas cheer is curtailed when disaster strikes, as a plane crashes down on Wisteria Lane, putting lives in peril. 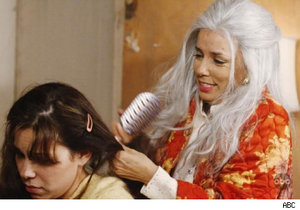 Plot Synopsis: In the aftermath of the plane crash, the residents of Wisteria Lane reflect on what their lives might have been had they made different choices: Susan contemplates a life with Karl had he not walked out on her, and Bree considers life without Orson. Lynette thinks about a future with her unborn twins, whereas Gabrielle imagines her daughter Celia aspiring to become a superstar actress, and Angie ponders the consequences should her secrets be revealed.

You Gotta Get a Gimmick 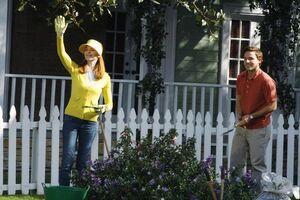 See main article: "You Gotta Get a Gimmick"

Plot Synopsis: Susan turns up the heat for Mike, whereas Lynette discovers Tom's true intentions regarding her job. Gabrielle is forced to examine feelings she's suppressed regarding her heritage, and Bree learns it'll be hard to undo the hurt she's caused Orson. In the meantime, Ana is more determined to land Danny.

How About a Friendly Shrink? 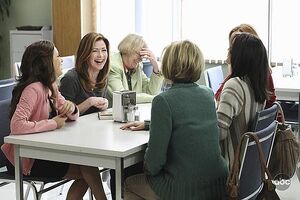 See main article: "How About a Friendly Shrink?"

Plot Synopsis: Lynette balks at the idea of seeing a couples' therapist. In the meantime, Katherine shows no intention of moving back onto the lane, whereas Gabrielle and Susan are determined to find out which of their kids is in the smartest math group at school, whereas Orson makes life harder for Bree and Angie disapproves of Danny's new girlfriend. 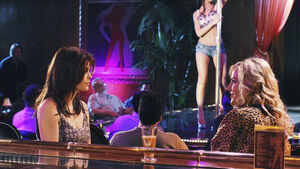 Plot Synopsis: Gabrielle and Carlos grow concerned with the direction Ana and Danny's relationship might be taking. In the meantime, Susan befriends a stripper named Robin and takes her under her wing, whereas Tom and Lynette come to a disagreement regarding their new therapist. Bree watches over Orson as she fears he may commit suicide, and Angie tries to get a neighbor to sort out her garbage, much to Nick's dismay. 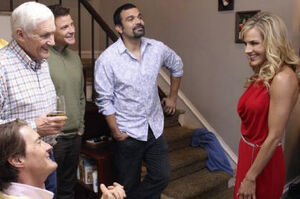 Plot Synopsis: Susan causes quite a stir when she invites a former stripper (guest star Julie Benz) into her home, because former exotic dancer Robin will have a profound effect on the ladies of Wisteria Lane: with three teenage boys at home, Lynette will need to keep a watchful eye on them, Bree needs to pick up a few tricks to engage Orson, Katherine needs to find a friendly companion, and Gabrielle needs help with her troublesome niece - and Robin might just provide that help, whether she wants to or not. 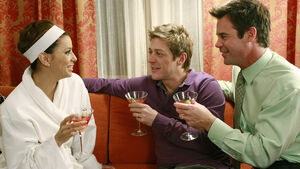 Plot Synopsis: Celia comes down with the chicken pox, and having never had it herself, Gabrielle must keep her distance, so she stays with Bob and Lee for a while, and is suddenly reminded of what it feels like to be "single" again. In the meantime, Tom and Lynette forget little Penny's birthday, which leads the girl to go missing. Bree hires a promising new employee (guest star Sam Page) and Katherine makes a surprising discovery about herself. Meanwhile, Susan cheats on Mrs. McCluskey, whereas Angie grows concerned over Danny's disappearance. 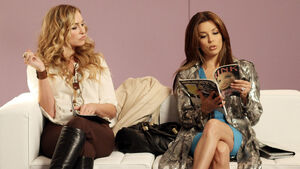 Plot Synopsis: Gabrielle and Angie head out to New York to track down Ana and Danny, and a chance encounter with supermodels Paulina Porizkova and Heidi Klum, Gaby's former co-workers, leads the former top model to an unexpected revelation about herself. In the meantime, Mike tries to prove to Susan that he is a man with a capital "M" after he feels emasculated by her, and the Scavo family is surprised to see Preston back from Europe... accompanied by a hot russian gold digger. Bree discovers a surprising connection to her new employee and Katherine feels confused regarding her feelings towards Robin. 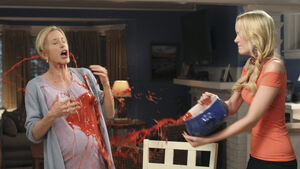 Plot Synopsis: Susan and Gabrielle go to extreme and shameless lenghts to top each other's kids, whereas Bree invites Sam over for a family dinner. A party is thrown for Mrs. McCluskey after she beats cancer, and Lynette thinks there is more to Preston's fiancée than she's letting on. Meanwhile, Katherine comes out of the closet, though not willingly.

We All Deserve to Die 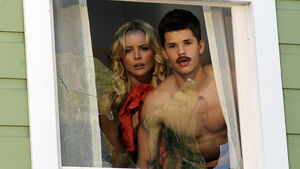 See main article: "We All Deserve to Die"

Plot Synopsis: Determined to derail son Preston's marriage to Irina, Lynette discovers the truth about her future daughter-in-law. In the meantime, Gabrielle offers to help out Bob and Lee in the most generous way, but does not consider the consequences. Bree begins to question whether Sam has a hidden agenda, and Susan gets creative to help Mike with his finances. Unbeknownst to Angie, Danny meets Patrick Logan (guest star John Barrowman) for the very first time. 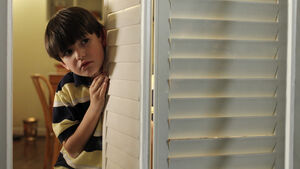 Plot Synopsis: The Fairview strangler has been living among the women of Wisteria Lane, and we are introduced to the life and times of the mysterious monster that's been ruining lives, and we realize just how much the ladies of Wisteria Lane have affected and shaped him. 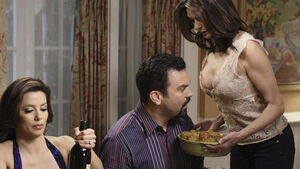 Plot Synopsis: After years on the run, Angie finally comes face to face with her ex-lover, Patrick Logan. Meanwhile, Gabrielle and Susan plan an elaborate scheme against their husbands, Lynette sees a darker side of Eddie, and Bree meets a woman who knows Sam all too well: his (supposedly deceased) mother.

The Ballad of Booth 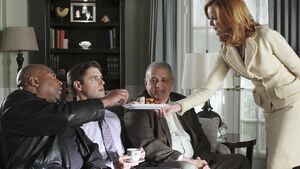 Plot Synopsis: Lynette comes to a shocking realization about Eddie, and Susan and Mike's financial woes result in the ultimate sacrifice. In the meantime, Bree offers Sam a generous payoff to walk away, and Angie relies on Gabrielle for help when Patrick threatens the life of her son.

I Guess This is Goodbye 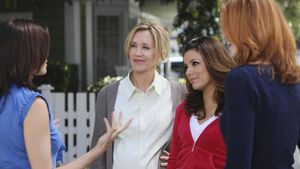 See main article: "I Guess This is Goodbye"

Plot Synopsis: Bree decides to hand over her company to Sam in order to protect her family's big secret. In the meantime, Susan and Mike prepare to move away, and Lynette is held hostage by Fairview's most notorious serial killer. Gabrielle puts herself at risk trying to help Angie and her family.

Retrieved from "https://desperatehousewives.fandom.com/wiki/Season_6?oldid=90092"
Community content is available under CC-BY-SA unless otherwise noted.