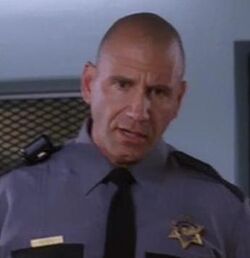 The guard seen in the episode "You'll Never Get Away From Me" is an unnamed police officer that interacts with Carlos and Gabrielle Solis.

On their anniversary, Gabrielle visits her husband Carlos in jail. They have a fight and the guard is forced to approach them and intervene, asking if there's a problem there. Gaby says to the guard: "No. It's our anniversary. We're just reliving the good times." ("You'll Never Get Away From Me")

Retrieved from "https://desperatehousewives.fandom.com/wiki/Security_Guard_(2.03)?oldid=79805"
Community content is available under CC-BY-SA unless otherwise noted.