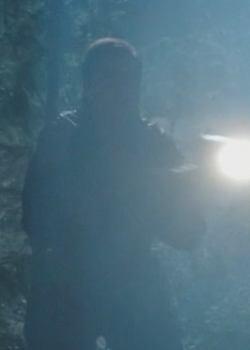 This Security Guard was the man patrolling Chapman Woods when Bree, Gabrielle and Lynette tried to dig up Alejandro's body.

It's night time. We see Bree quickly running through the woods, apparently from someone holding a flashlight, and she doesn't look back once as she runs. We then see Gabrielle running too, holding a shovel. As she runs, she whines with fear. She then finds a tree and hides behind it, just as the man holding the flashlight walks past. He shines his flashlight at the tree, but doesn't see Gaby, so he continues to walk. Then we see Lynette also running through the woods holding a shovel. She then trips over a fallen branch, just as the man with the flashlight shines his light at her, but he cannot see her. She then picks up her shovel and continues to run in panic. The man with the flashlight seems to give up on his search, but the women keep running. Bree then comes into an opening in the woods, and she quietly calls out for Gabrielle and Lynette. She then notices something on the floor and horrifically says "Oh my, God", and she stares at it with terror. Meanwhile, Gaby and Lynette have found each other. They quietly make their way through the woods. Lynette says that she thinks they're close as she recognizes the area. Gaby announces that she’s scared, and Lynette says the fact that it’s Halloween doesn’t help. Gaby then says they need to “dig him up and get it over with”. With that said, they hear Bree calling out for them. They then find Bree, staring at the floor. Lynette asks if she’s okay, but she doesn’t reply. Lynette and Gaby get closer to Bree, and then they see what she sees too. They also look in horror and Gaby moans “no”. ("Witch's Lament")

Retrieved from "https://desperatehousewives.fandom.com/wiki/Security_Guard_(8.06)?oldid=80004"
Community content is available under CC-BY-SA unless otherwise noted.