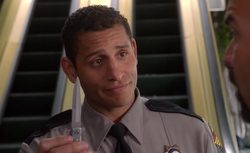 The unnamed security guard worked at the courthouse that Bree's trial was held in.

Gabrielle and Carlos are seen standing in line for the courthouse's metal detector, and the latter is wearing the coat his wife admired the night before. Carlos tells her that if they take him into custody right away he won't have a chance to talk to the girls. Gaby tells him not to talk about that at the moment, and he points out that he doesn't want them to see this on the news; he wants her to tell them that he loves them and that she's in charge from then on. Gaby tells him she's always been in charge. Carlos is feeling uncomfortable in his coat and wonders why she made him wear it, as he starts to take it off. Gaby turns back to him and insists that he keep it on, claiming that it's freezing in the courtroom - despite wearing a skimpy outfit herself. Gaby says he'll thank her later. They look at each other and Gabrielle starts petting his face, telling him he's so handsome and that she's gonna miss his face. Carlos whispers that he loves her, and they kiss. Gaby then skips ahead from an old man who's taking out all his belongings and putting them into the basket, as she says "Ladies first." She puts her purse in one of the boxes and slides it through, and her husband tells her that's a little rude. Gaby turns back and says "You snooze, you lose.", before she walks through the metal detector, scot-free. Carlos then comes after her as she rushes to get out of there, grabbing her purse, and as he goes through the metal detector it goes off.

The security guard stops Carlos, telling him to hold on, and starts examining him with the metal detector wand. Gaby stops to take a look at the unfolding of events she set up. The scanner detects something just under the back of Carlos' neck, and he points out that this is weird. The officer asks him to remove his coat, which he does, and Gaby watches from a distance. The guard then feels up the inside of the coat and picks up on something. He opens a small pocket and finds a penknife. He asks Carlos to explain this, and a befuddled Carlos tries to explain that he didn't put that there... and then he notices his smirking wife looking at them, and Gaby waves him goodbye and leaves. Her angry husband tries to follow her as he tells her to get back, but he is stopped by the officers. He screams her name and she turns back to him and quickly says "Love you." and disappears. ("Give Me the Blame")

Retrieved from "https://desperatehousewives.fandom.com/wiki/Security_Guard_(8.22)?oldid=78168"
Community content is available under CC-BY-SA unless otherwise noted.