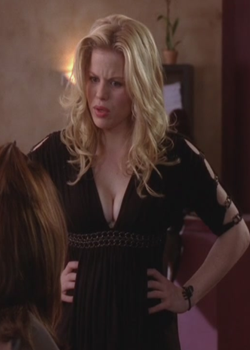 At some point in her life, Shayla met Bradley Scott and began an illicit affair with him.

Shayla has a rendezvous with Bradley in the front seat of his car, much to the surprise of Gabrielle Solis. Upon realising that he has been discovered Bradley quickly drives away, embarrassed. ("In a World Where the Kings Are Employers")

After covering for Bradley for far too long, Gabrielle visits Shayla at her workplace and voices her opinion on the affair. She tells Shayla that sleeping with a married man who has kids is wrong, and that she is the one who is in the wrong. Thinking that Gabrielle is talking about herself, Gabrielle snaps at her and tells her that she's not talking about herself but Shayla and Bradley. When asked how she knew, Gabrielle tells her what she's been covering the affair up for them. Shayla asks Gabrielle to leave, but when she refuses, she holds a pair of scissors against some of Gabrielle's hair, threatening to cut it off which would make it look odd. Gabrielle agrees to leave, storming out in the process, yelling, "This is why people should never get their haircut in a mall!". Later on, Shayla tells Bradley that Gabrielle had visited her. Bradley tells Maria the truth and in a fit of rage, she stabs him in the back. Before he died, Bradley had told Gabrielle that he loved Shayla and wanted to be with her. ("Crime Doesn't Pay")

Retrieved from "https://desperatehousewives.fandom.com/wiki/Shayla_Grove?oldid=87967"
Community content is available under CC-BY-SA unless otherwise noted.