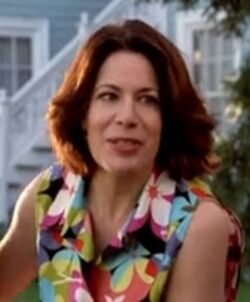 Sheila moved to Wisteria Lane, to live in the Miller’s old house, in 2004 along with her 9-year-old Ashley Bukowski. Mother and daughter, first appear in Episode 3, of Season 1, and they are new residents. Ashely catches Gabrielle and John kissing inside her house, while standing on Gaby’s porch. When Gaby sees her, she gets startled and screams, making Ashley run away. Ashely’s mother is then seen talking to Carlos’ because Ashley left her ball in his backyard, and Gaby pulls up as they’re talking.

Retrieved from "https://desperatehousewives.fandom.com/wiki/Sheila_Bukowski?oldid=89475"
Community content is available under CC-BY-SA unless otherwise noted.