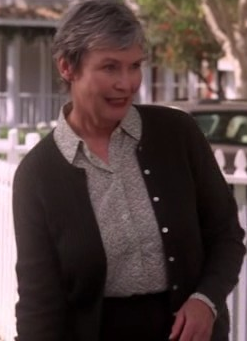 Sheila, along with her husband Joe, came to Fairview to pick up their granddaughter Kayla, who was living with her paternal family, following the demise of her mother (Sheila's daughter Nora), who had been killed during a local hostage shootout. Kayla was sent to live with her maternal grandparents after trying to break apart the Scavo family by having her stepmother, Lynette, thrown in jail due to false child abuse claims. Before they left, Sheila told her granddaughter that maybe they could spend the night in a hotel with a swimming pool, so she and her grandfather could take a dip. As the Huntingtons drove away with their young granddaughter, Kayla turned to the back of the car and screamed at her father that she was sorry, but to no avail It is presumed that she stayed with the Huntingtons for the rest of her adolescence.

According to Tom's claims in "Free", the Huntingtons lived approximately seven hours away from the town of Fairview.

Retrieved from "https://desperatehousewives.fandom.com/wiki/Sheila_Huntington?oldid=84456"
Community content is available under CC-BY-SA unless otherwise noted.