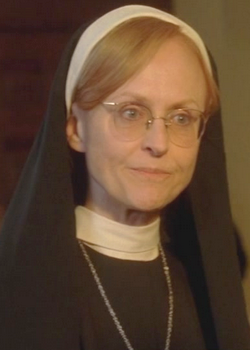 Sister Marta is a Nun and Teacher in Las Colinas, a small town where Gabrielle Solis grew up.

When Gabrielle was molested by her step-father, Alejandro, she told Sister Marta about her dreadful situation, feeling that she could trust her teacher. Instead, Marta insisted Gabrielle was lying and blaimed her claims on her imagination, which she said she acquired from reading trashy books and magazines she always sneaked into class. Sister Marta continued to believe that Gabrielle made the whole thing up for years.

When Gabrielle returns to Las Colinas, she spots Sister Marta on the side walk and quickly tells her husband, Carlos, that they are going to the hotel. While the pair get into a cab and drive away, Marta continues to look on and watches the cab pull away.

Later, when Gabrielle is doing a little "motivational speaking" at her old school, she is introduced to Sister Marta, who bluntly insults Gabrielle before walking away. Gabrielle then confronts Marta and tells her that she thought she could trust her with a dark secret that she couldn't even tell her mother, and it's still obvious Marta doesn't believe her, which angers Gabrielle. The nun asks her if she returned to blame her for everything, and Gaby answers that she came back because her therapist asked her to read a letter out loud at the grave of the man who abused her. But now she realizes she needs to tell the nun what she feels instead. She didn't deserve what happened to her, she was a child, but the nun was an adult who did nothing, and she's the one who should be ashamed of herself.

Retrieved from "https://desperatehousewives.fandom.com/wiki/Sister_Marta?oldid=86339"
Community content is available under CC-BY-SA unless otherwise noted.