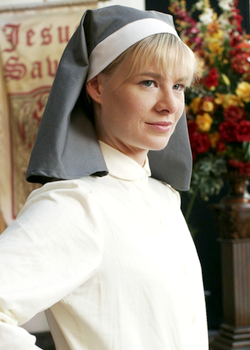 Sister Mary is the blonde Catholic nun who helped getting Carlos released from prison without doing full-time.

She and Gabrielle instantly clashed, because not only is Mary pretty, she also blames Carlos' problems on Gabrielle’s excessive materialism. Gabrielle views her as a threat and called her "a knockout" and "Sister Mary Hotpants." As the Sister grew up on the South Side of Chicago, she came to be a tough rival for Gabrielle, regarding Carlos' affection. The Sister and Carlos later became involved with the church’s relief effort to Botswana. Initially, the church did not have enough money to afford to send the Sister. Gabielle, upon hearing this, offers to donate the needed amount ($8,000.00) in order to get Sister Mary out of the way. Thinking she'd won, Gabrielle is satisfied, but the sister then convinces Carlos to join her in Botswana. At that point, Gabrielle lies to the hospital where Carlos was getting vaccines and says he's allergic to fish eggs (as opposed to chicken eggs). This caused Carlos to have a violent allergic reaction, and Carlos was forced to stay home while the sister was forced to go to Botswana. Upon her return from from Africa, Gabrielle further maneuvered to distance the Sister from Carlos, even lying in a confession that Carlos and Sister Mary had slept together, resulting in a reassignment to a parish in Fairbanks, Alaska, but not before discovering that Gabrielle caused this and ends up fighting with her in the church. It is unclear who the definitive winner is, as this is the last we see of the sister. However, they stop fighting when a group of children enter the chapel and see their battle. This is the last we've seen of Sister Mary Bernard.

Retrieved from "https://desperatehousewives.fandom.com/wiki/Sister_Mary_Bernard?oldid=84458"
Community content is available under CC-BY-SA unless otherwise noted.