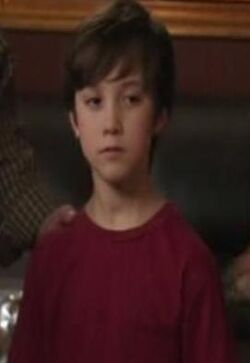 The son of the steel worker seen in the episode "You Take for Granted" is the child of a man who Carlos Solis tried to make up for indirectly getting him laid off from work.

Global Group Venture, Carlos Solis' company, once acquired a steel company, chopped it up, sold it and made a nice profit, and in the process several people were laid off from their work. After a stint in rehab, Carlos took it upon himself to compensate these people by handing each of them a cheque for $50'000. This prompts his secretary to get a hold of his wife, who rushes to the office.

Upon seeing his wife, Carlos tells her that he took her advice: she told him to shake things up, so he decided to make work a place he wants it to be. This said, he finishes writing down a cheque and hands it to the steel worker, and then turns his attention to the kid and tells him he can be anything he wants to be, "Nothing is out of reach". The father says, "Whaddaya say, Skip?", to which the kid promptly tells Carlos, "Thanks, mister." Gaby asks him if this is how he shakes things up, by giving away all the company money, but Carlos tells her he was afraid Patrick would put a stop to payment so he just decided to use their own personal account. This said, Gabrielle immediately rips the cheque out of the steel worker's hand, and rushes them out of the office, closing the door behind them.

Retrieved from "https://desperatehousewives.fandom.com/wiki/Son_(8.16)?oldid=67953"
Community content is available under CC-BY-SA unless otherwise noted.