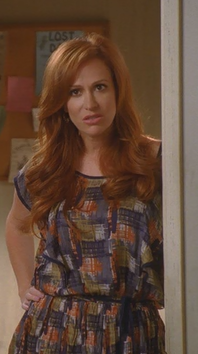 Stacy Strauss was a tenant in Maxine Rosen's apartment complex, as well as one of her Internet "models" (for the website Va-Va-Va-Broom.com), and thus Susan Delfino's neighbor and competitor. She resided in Apartment 1F.

Susan is becoming a big hit with Va-Va-Va-Broom.com, and Maxine, her "madame", gives her a bonus check as she was the girl with the most hits on her softcore site, even beating out former reigning model Stacy Strauss, which isn't an easy feat to accomplish, considering Stacy has a big rack. Susan is very pleased, and since she and her husband Mike are finally starting to save some money, she tells him in the laundry room that they should go to Chez Naomi to celebrate. Mike is a bit hesitant, though. Once he leaves, Susan is confronted by a neighbor, Stacy Strauss, who says she stole her bit involving inserting a feather duster in the mouth. Susan says it was a coincidence, as she doesn't watch what the other girls do. Stacy tells her to watch her back. Later, Susan comes over at Maxine's, while the latter is ordering steaks to offer her cleaning girls for Christmas, and Susan heads into the monitoring room to get her money envelope, and she notices Stacy is using a vacuuming bit Susan came up with. An angry Susan then steals the key to Stacy's apartment and breaks in. When Strauss gives another show, she prepares to perform the vacuum stunt and it all backfires, as it starts blowing dust into her face, after Susan had sabotaged it. Susan laughs it off as she watches her rival's show go down in dust, and proceeds with her own show. Stacy comes over, busting through the front door, and the two engage in a catfight. Maxine watches it all from her monitoring room and, thinking it's all a bit, is disappointed when the two roll away from the camera's angle and heads on over to warn them. Susan cuts the live broadcast short, and tells Maxine that Stacy interrupted her. Her boss is upset at Stacy, and tells her to go to her room. She does so, and Maxine jokes that their catfight video got so many hits it was too much for her router. Later, in the laundry room, Stacy apologizes to Susan, as Maxine won't let her do another show unless she does just that. Strauss says she is desperate to go back to Virginia, where her family is, which is something Susan can relate to. She then tells Stacy that if she was so willing to go back home, she shouldn't spend so much on all the fancy things she saw when she broke into her apartment. Stacy explains that she just feels the need to splurge a little every once in a while, which is also something she can relate to. However, they are both confident that by the end of the year they will be able to get out of that shady business. Susan asks Stacy how long she has been doing this, and she says it's been six years already. Delfino is horrifiend, and she later tells her husband they don't need to go to Chez Naomi, they'll do that once they get back to Wisteria Lane. Mike is very relieved. ("Truly Content")

Retrieved from "https://desperatehousewives.fandom.com/wiki/Stacy_Strauss?oldid=77822"
Community content is available under CC-BY-SA unless otherwise noted.