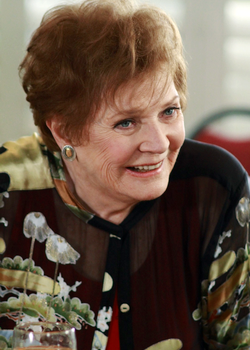 Stella Kaminsky (previously Lindquist and Wingfield) is the inappropriate, drug-taking mother of Lynette and her sisters.

Lynette along with her two younger sisters, were mistreated by her mother during their childhood, as Stella was constantly inebriated and abusive. Because of this her eldest daughter was forced to care for the younger two. As a result, her daughters grew to become a resentful towards their mother, who aren't so eager to forgive her past misdeeds.

When Porter Scavo was charged for burning down Warren Schilling's club, he ran away to live with Stella in her retirement home. He lived there for several days until Lynette learned of this and tried to bring him home. Stella lied to Lynette and told her that he wasn't there so Lynette staged a car crash hoping that Stella would bring Porter to the hospital to see if she was all right. When she did this Lynette took Porter back and told Stella that she would never see her again.

Lynette and Stella later come to an agreement that if Stella stopped being so bitter then Lynette would visit her more frequently and bring her children with her, too.

Lynette mentions Stella in Season 6 when counseling Eddie Orlofsky after he attacked Porter for disrespecting her. She tells him that she knew what is was like to grow up with an "alcoholic mother" and shares a technique of how he can control his anger.

Stella returns in Season 7 and gets remarried against the wishes of her daughter Lynette, however she reveals she is marrying Frank for his money. The newly wedded couple go to take a photo at Lynette's, when Frank unexpecedly dies.

Due to the fact that Stella must wait 12 hours to appear in Frank's will, she and Lynette agree to keep Frank's dead body overnight. It is later revealed Stella did in fact appear in Franks will, as she offers to buy expensive products for he grandchildren - i.e.Lynette's children.

1 of 7
Add photo
Retrieved from "https://desperatehousewives.fandom.com/wiki/Stella_Wingfield?oldid=89880"
Community content is available under CC-BY-SA unless otherwise noted.