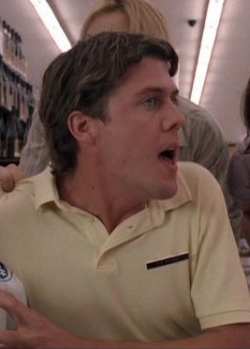 This Stockboy worked at the supermarket in Fairview where Carolyn Bigsby took people hostage.

Inside the supermarket, Lynette and Nora sneak around the aisles until they find a shop assistant hiding. They ask him what’s going on and he explains that Mrs. Bigsby has a gun. The three then watch from a distance as she points a gun at the people she has hostage. The shop assistant says they he can make it out the front doors, as he runs for the front doors Carolyn sees him and, in anger, shoots him in the shoulder. The doors then open and the man escapes, seriously injured. ("Bang")

Retrieved from "https://desperatehousewives.fandom.com/wiki/Stockboy_(3.07)?oldid=77335"
Community content is available under CC-BY-SA unless otherwise noted.