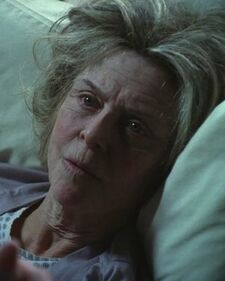 Teresa Pruitt was a nurse at Fairview Memorial Hospital who was responsible for the baby switch of Juanita Solis and Grace Sanchez.

She loved her job with all her heart, but one day it all choose. Few years later, Teresa came back at Fairview Hospital, but as a patient and dying, also with a secret. She was visit by the priest and she tell him she didn't retire from the hospital, quit because of guilt. He offers to take confession, but she said no because confessions are private and she want's the hospital know what she did, because they must make it right. Teresa passed away, but not before telling him her secret. The priest then proceeds to a hospital directors office. The director calls in the lawyers, Jack Pinkham one of whom states that he knew the family who has one of the kids she switched at birth.

Retrieved from "https://desperatehousewives.fandom.com/wiki/Teresa_Pruitt?oldid=85789"
Community content is available under CC-BY-SA unless otherwise noted.