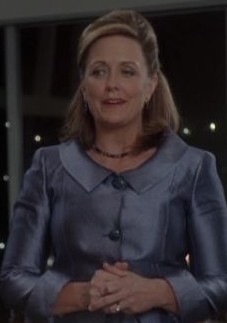 Tish Atherton is a recurring character on Desperate Housewives.

Tish approaches Bree and Rex Van de Kamp at the Fairview Country Club. and tells them that Maisy Gibbons kept a little black book of her prostitiution clients and the details enclosed within it would soon become public knowledge. Though Tish has a penchant for worthless gossip, it soon came to be that this little tidbit was true. Bree went to visit Maisy in jail, to convince her not to release Rex's name. ("The Ladies Who Lunch")

Tish is shown dropping off her kid at a friends house so she could have a few hours at the salon. ("Color and Light")

She is seen at the imfamous dinner party at Bree Van De Kamp's house, where George Williams, hoping to profess his deep love for Bree, serenades her with a karaoke machine. Tish is both shocked, and slightly tickled, by this seemingly amusing event. ("That's Good, That's Bad")

Tish is seen at yet another party, this time at Maxine Bennett's house, also attended by Bree. At first, she scoffs at Bree's claim that Maxine had help preparing the lavish proceedings, but once the FBI raids the house and finds Maxine's slave, Xiao-Mei, Tish changes her tune and is simply stunned by what has happened. ("Silly People")

The night Danielle tries to "commit suicide", Bree hints to Orson at the dinner table that Tish has been snubbing her, possibly because she didn't buy Tish's daughter a baby shower present, because of her policy of never being baby gifts for single parents. She is only mentioned, not seen or heard. ("Nice She Ain't")

We finally see Tish snub Bree at the country club, because of her marriage to Orson Hodge. It is later unveiled that Tish was a friend of Carolyn Bigsby, hence her snubbing Bree. Bree then arranges a dinner at the Country Club for the herself, Orson, Carolyn, and her husband Harvey Bigsby, so that she can be seen with Carolyn and end the rumors of Orson killing Alma. Tish sees Bree and Carolyn together and changes her tune about their relationship. Bree suggests that Tish consider her for a place on the Christmas Gala Committee, and Tish accepts. ("Sweetheart, I Have to Confess")

Tish calls Carolyn as she is holding people hostage at Field's Market, telling Carolyn that she forgot to arrive at some function. She is not seen or heard, but eventually Carolyn tells her to "turn on her damn TV", so she can see what is going on. ("Bang")

Retrieved from "https://desperatehousewives.fandom.com/wiki/Tish_Atherton?oldid=84989"
Community content is available under CC-BY-SA unless otherwise noted.