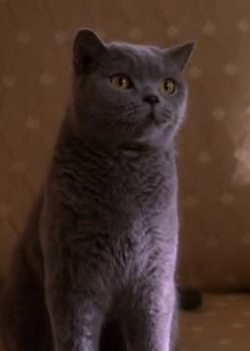 Toby is a British Shorthair that was Ida Greenberg's pet cat. However, after her tragic death, Karen McCluskey assumed care of him.

Although not seen, Toby goes missing on the night that Felicia framed Paul for her murder. Karen goes out to search for him as a favor for Ida Greenberg, and she runs into Felicia as she escapes Fairview. ("The Lies Ill-Concealed")

When Ida Greenberg wakes up one morning, she is pleased to find Toby sat on her bed, waiting for her. Toby begins to lick Ida's face happily, making Ida smile. ("The Little Things You Do Together")

As a tornado hit Wisteria Lane, Ida Greenberg takes shelter in Karen McCluskey's basement. She brings Toby along with her, which causes problems. The Scavo family also arrive, and Tom, being allergic to cats, starts having breathing difficulties. Lynette tries to get Ida to move Toby outside, but Karen won't allow it as Toby is like a child to Ida. However, Lynette eventually takes the cat upstairs and tries to put it in a closet, but Karen finds her and stops her. The front door then swings open and Toby escapes. Karen goes outside to search for the cat, and Lynette reluctantly helps. Toby takes shelter under a car as the tornado rages on the street. ("Something's Coming")

After Ida died during the tornado, Karen assumes care of Toby.

Toby goes missing once again, so Karen goes out to look for him. Bree offers to help Karen and after a while of searching, she eventually finds him. However, as she holds him, Bree sees Orson and Edie kissing. Toby then escapes from Bree and runs away once again. ("Opening Doors")

When Karen makes a harsh remark about Edie which upsets her and makes her want to leave Wisteria Lane, Dave William's confronts Karen and asks her to apologize, while Toby is in the same room. Karen says she doesn't need to because she isn't a horrible person. Dave tells her it would be a personal favor and then subtly blackmails her by picking up Toby and saying Karen needs to hold on to the few friends she has left. Karen kicks Dave out of the house and takes Toby back. Dave later secretly kidnaps Toby. He tells Karen that he'll help her find Toby if she apologizes to Edie for what she said. Karen eventually reluctantly agrees to do so, and then Toby mysteriously reappears one night, leading Karen to believe Dave took him. ("We're So Happy You're So Happy")

Toby is seen, alive and healthy living on the lane. He was seen standing outside the Solis House on their porch, in front of Celia Solis as she talks to him and confides in him as she tells him her secrets. ("What's to Discuss, Old Friend")

Retrieved from "https://desperatehousewives.fandom.com/wiki/Toby?oldid=86084"
Community content is available under CC-BY-SA unless otherwise noted.