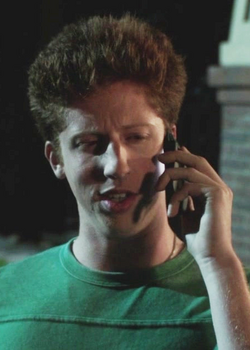 Toph is a teenager who answered Parker Scavo's cell phone at a party they both attended.

After allowing Parker to go to a party, Lynette becomes worried and tries to call him. However, Toph finds Parker's phone ringing and answers it. Lynette tries to find out if Parker is okay, and a clearly drunk Toph assures her everything is fine. He then tells Lynette he's ready to have sex with her, if that's what she wants. Then he tells that the party is like a "lord of the flies" situation, worrying her so much that she goes to the party to pick Parker up. ("Making the Connection")

Retrieved from "https://desperatehousewives.fandom.com/wiki/Toph?oldid=86629"
Community content is available under CC-BY-SA unless otherwise noted.