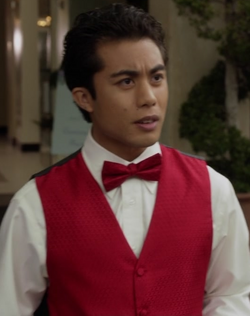 The unnamed valet seen in the episode "Finishing the Hat" worked for the local hotel where the wedding reception for Renee Perry and Ben Faulkner was had.

We are shown the Valet Parking sign on the outside of the local hotel where Renee and Ben's wedding reception is being held. Renee and bridesmaid Gabrielle, looking all frazzled, finally arrive to the area, and the young valet approaches them and asks if they don't have a car. An angrily frustrated Renee tells him "Does it look like we have a car, huh?", and then she grabs him by his coat and shouts in his face "Does it?". The scared valet nods negatively, and Gabrielle breaks them off, telling the bride-to-be that she is late for her own wedding, so she should maybe kill that guy later. ("Finishing the Hat")

Retrieved from "https://desperatehousewives.fandom.com/wiki/Valet_(8.23)?oldid=68797"
Community content is available under CC-BY-SA unless otherwise noted.