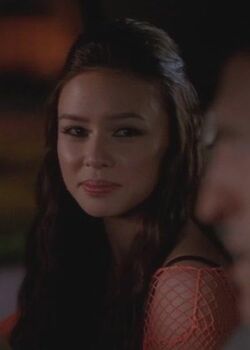 Violet was a prostitute working on the streets of Fairview.

While driving home after an unsuccessful date with Bree, Chuck noticed Violet almost getting into a man's car. He asks Bree if he still has a chance with her, and she lets him know he doesn't. He then pulls over to pick up Violet and take her to a women's shelter, adding that this action couldn't possibly make things worse between him and Bree. Violet asks why Bree doesn't like Chuck, but Bree says it is none of her business, causing Violet to say Chuck is better off without her, as she's got a stick up her ass. Chuck smiles slightly before dropping Violet off. Violet says she'll be back on the streets tomorrow and adds that all she will ever be is a prostitute. Chuck announces that Bree used to be a prostitute - causing her to be shocked - but turned her life around, by going to school and eventually starting up a very successful catering company. Violet asks if it is true, if she was indeed a prostitute, and Bree quietly says she doesn't like to talk about that part of her life. Violet is inspired and gets out of the car to go to the shelter. Bree looks at Chuck, who points out that as he had no chance with Bree he had nothing to lose. ("Then I Really Got Scared")

Retrieved from "https://desperatehousewives.fandom.com/wiki/Violet?oldid=76295"
Community content is available under CC-BY-SA unless otherwise noted.