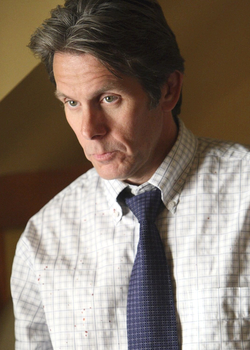 Wayne Davis was a police officer, Katherine's first husband, and the father of the "real" Dylan.

It is shown in flashbacks that he beat his wife and also had a drinking problem, causing Katherine to leave him. ("Sunday")

He spent twelve years trying to track Katherine and his daughter down and discovered Katherine is back on Wisteria Lane. He wanted a relationship with his daughter, or who he thought to be his daughter. ("In Buddy's Eyes")

Finally Katherine informed him that Dylan is not his child. Upon hearing this, he had a blood test done at the hospital under the guise of it being a homicide. The test results come back concluding that he is not Dylan's father. He tries everything in his power to find out what actually happened to his daughter, even threatening to kill Katherine so she would tell him. He then held Katherine hostage along with her best friend, Bree Hodge, until Katherine finally told him the truth about what happened to his daughter. It turns out that she was accidentally killed by a fallen bookshelf after Katherine placed the doll that he had bought her on the top shelf. Katherine and her aunt buried her in her backyard so Wayne would not convince the police that she had killed her in order to keep her from him and have them both arrested for murder. After this, she went to a Romanian orphanage and found a girl who looked a lot like her recently deceased daughter. Katherine then adopted the young girl and changed her name to Dylan Mayfair, to cover up the real death of her daughter, Dylan Davis. When he found this out from Katherine, he was going to kill her, until Adam, came to her rescue. After a fight between the two ensues, Wayne winds up shooting himself in the abdomen. Then as Bree goes to clean Adam up, Katherine is left holding a gun to Wayne, who lays conscious on the floor. As he lays there he tells her that he'll do some time in jail but his buddies will help him get out and that he'll come after her again. After realizing the truth in his statements, Katherine shoots him in the chest, killing him instantly. ("Free")

Retrieved from "https://desperatehousewives.fandom.com/wiki/Wayne_Davis?oldid=88985"
Community content is available under CC-BY-SA unless otherwise noted.