Start a Wiki
watch 01:24
The Loop (TV)
Do you like this video?
What Would We Do Without You? 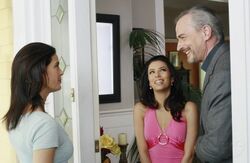 Mike and Susan go out to dinner, the night exactly a year after he and Susan were meant to get engaged and Mike got run over. Susan waits for Mike to pop the question all night, but Susan is disappointed when he doesn't. On the way home, Susan tells Mike what she expected and when they pull up into Wisteria Lane the trailer Susan decorated on the night they intended to get engaged is waiting on her driveway. They live the experience they were meant to have that night and they get engaged.

Susan calls around, telling everybody the wedding is back on, and that she plans to have the same arrangements as with her and Ian’s wedding. She tells Gaby of their plans but Gaby tells her she's now booked her own wedding for that day. Susan learns she’s taken the exact wedding she and Ian were supposed to have, which leads to an argument. They apologise to each other and Gaby cancels the flowers but leaves the same date. While talking, Gaby and Susan come up with the idea of sharing the wedding day, but the next day they realise they don't want to. To spare Gaby's feelings, she tells her Mike disapproves of the idea. When Gabrielle discusses it with Victor, she’s shocked to learn the press will be at their wedding and that most of Victor’s efforts is all about his image. Gabrielle becomes worried that marrying Victor will be a mistake.

Edie becomes upset when Carlos laughs at the idea of them getting married, when suggested by Mike. Edie asks Carlos if they can move in together but Carlos rejects the idea, having already signed a lease with the owner of Mike's house, Lillian Simms, who's in a nursing home. In an attempt to undo this, Edie visits Lillian and lies about Carlos to get her to rip up the lease, which she does. Under the law she can change her mind within 72 hours of the agreement, Carlos is evicted and Edie offers him a place to stay. Carlos catches on to the fact she has had something to do with this, and she asks him why he won't commit to her. He reveals he's not in love with her, and she tells him she might be pregnant. The pregnancy test comes back negative, and Carlos finds himself disappointed. Finding a new way to keep Carlos, Edie suggests they try having a child even though they're not in love, and Carlos agrees. Edie, however, is still secretly taking her birth control pills.

Lynette and Tom’s marriage continues to decline and Lynette doesn't speak to Tom for five days. In an attempt to rebuild their marriage, Tom gets his old college friend and marriage counselor to try and speak to them without Lynette knowing, but she clocks on to Tom’s actions and becomes even more frustrated with him. With Tom’s doctor informing him on his back recovery, Tom suggests to Lynette they have sex as it's the only way they can communicate unless they talk instead. Lynette agrees to sex and refuses to talk but becomes violent with Tom. In a moment of anger, Tom seizes Lynette and asks why she's mad at him, and she reveals it's because he had lunch with Rick and because she had to fire him. Lynette then shoves Tom back onto the bed, hurting his back. Tom's back spasms and he moves suddenly causing Lynette to fall off the bed, banging her head on the side table. She goes to hospital for her injury and Tom finds out Lynette fell for Rick and misses him. The doctor performs a CAT scan on Lynette and finds swollen lymph nodes and suggests they do a biopsy as it could be lymphoma.

Retrieved from "https://desperatehousewives.fandom.com/wiki/What_Would_We_Do_Without_You%3F?oldid=81645"
Community content is available under CC-BY-SA unless otherwise noted.