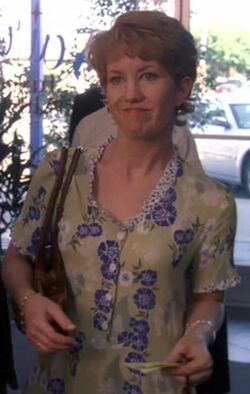 The woman featured in the episode "You Could Drive a Person Crazy" is a random female customer seen waiting in line at Mr. Pashmutti's dry cleaning store.

Bree Van de Kamp and her mother-in-law, Phyllis, are seen at a dry cleaning store, operated by Mr. Pashmutti. He is seen talking to some customers after handing them their clothes, and Phyllis tells Bree that him chatting away is so inconsiderate. However, as soon as Mr. Pashmutti gets to them and offers them his condolences over Bree's husband's passing, Phyllis has a breakdown. Bree tries to get her to rush, because there are people waiting in line, and then she starts to leave. The woman after her steps in front and Phyllis addresses her, apologizing for keeping her waiting, and adding that her son has just died. The woman tells her she's so sorry, and Phyllis explains that she was just telling Mr. Pashmutti that her life is over. She starts to breakdown, and Bree becomes angry.

Retrieved from "https://desperatehousewives.fandom.com/wiki/Woman_(2.02)?oldid=77823"
Community content is available under CC-BY-SA unless otherwise noted.