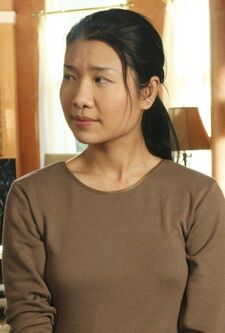 Xiao-Mei was the Solis family's housemaid; she soon became their surrogate mother (with an embryo that wasn't theirs) and Carlos' mistress.

Xiao-Mei is an illegal immigrant from China, sold by her uncle to Maxine Bennett (an acquaintance of Bree's) as a domestic servant. After being liberated by the authorities, she is brought to the Solis home by Father Crowley. After Lily is taken away from the Solises, they begin to explore the idea of surrogacy. This coincides with Xiao-Mei's need to avoid deportation, which the ICE and INS have been threatening Xiao-Mei with since her liberation from Maxine Bennett's house. Believing she has found a way to have her cake and eat it too, Gabrielle convinces Carlos that Xiao-Mei's surrogacy would solve both problems. However, Xiao-Mei does not understand the process which Gabrielle and Carlos are proposing. Catching Carlos in the master bath before the appointment at the fertility clinic, Xiao-Mei slips off her robe to reveal that she is wearing nothing, and then scoots into bed as Carlos turns to stare at her and gives the classic 'be gentle' line. Carlos, dumbfounded, is then jolted from his stunned stupor by Gabrielle, who is not happy that Xiao-Mei has misunderstood and less happy that Carlos did not instantly correct her misconception.

Later, Xiao-Mei had begun an affair with Carlos, which created suspicion from Gaby. From the help of the baby monitor at Lynette's house, it intercepted transmissions from the previously planted monitor in the garage at Gaby's house. Arousing suspicion, Gaby found out about the affair between Carlos and Xiao-Mei. It is decided that Xiao-Mei will continue to be the housemaid until the birth of their baby.

As a result, Carlos was forced out of the house and Gaby was forced to watch over Xiao-Mei as her pregnancy grew difficult, which caused some tension between the two to the point she even ran away once. Her water broke at Bree's wedding and she gave birth to an African American baby boy as the Solises' embryo had been accidentally switched with another embryo that didn't take.

Retrieved from "https://desperatehousewives.fandom.com/wiki/Xiao-Mei?oldid=87982"
Community content is available under CC-BY-SA unless otherwise noted.