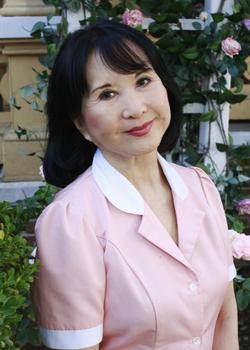 Gabrielle and Carlos' Chinese housekeeper, who was constantly on Gabrielle’s case due to having to keep lying to Carlos from revealing her affair and not doing a very good job when it came to housekeeping. She was eventually fired in "Love is in the Air" when Gabrielle came to the final straw with Yao Lin and admitted that they were having financial problems. After this, Yao Lin runs into Gabrielle when she is working at the cosmetic counter and demands a makeover, the perfect humiliation. She reappears in a flashback in the one hundredth episode and she sniggers as Eli Scruggs tells Gabrielle the other housewives had described her as a show off and even a bitch.

1 of 1
Add photo
Retrieved from "https://desperatehousewives.fandom.com/wiki/Yao_Lin?oldid=78867"
Community content is available under CC-BY-SA unless otherwise noted.